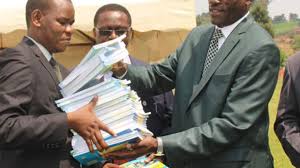 Primary and secondary school heads have defied a direct order from the education ministry to collect and store textbooks citing high insecurity levels in schools.

The education ministry directed the 23, 000 primary school heads to collect the consignment for their various schools worth over Kshs 700 million.

“Kindly arrange to be at the given venues at times stipulated to collect class five and six textbooks. Bring along your stamp to sign the delivery. Due to security reasons, no books will be stored at the venues. Please cooperate,” reads part of the message sent to school heads.

In the past few weeks, cases of theft and vandalism have been reported in various schools.

Consequently, the ministry of education wrote a memo directing school heads to take responsibility and ensure school property is safe.

According to the memo, the ministry is concerned that most schools have been left unmanned following the sudden closure of schools in mid-march and suspension of subordinate staff’s salaries.

TSC New Salaries and Point Scales for Newly Recruited and…

Kuccps Second Revision 2021 list of candidates to carry out…

Most security guards have downed their tools following lack of salaries for almost four months now.

Now that most of the security guards are off duty, there arose speculations that the ministry wants teachers to be recalled to man school property in the name of being on duty.

This may however not be possible since the teachers’ duties and responsibilities are clearly stipulated. Besides, regular classroom teachers are not paid responsibility allowance, unlike school administrators.

The heads feel that there is no urgency to supply books at this time because pupils are at home following the unprecedented covid-19 break.

The Kenya Primary School Heads Association national chair Nicholas Gathemia said that he has received numerous complaints from headteachers who feel that they do not have the capacity to secure the new books in schools since many security guards quit due to lack of pay.

“The headteachers want the supply of books done after schools reopen so that they can issue them to learners immediately they are received to ensure maximum security,” he said.

He further added that storing books worth hundreds of thousands in schools without security guards who have not been paid for a long time poses a huge risk to teachers’ jobs.

“This will attract break-ins that will put headteachers in an awkward position as all the blame will be rested on them. Let books stay where they are until schools open, “added Gathemia.

The Kenya Secondary School Heads Association national chair Kahi Indimuli has also supported his KEPSHA counter-part saying that what is urgent right now is to prepare schools for reopening through the construction of extra classrooms and provision of enough water for regular handwashing.

Mr. Indimuli said that secondary school heads have so far not been notified to collect textbooks.

The standard five and six textbooks currently being distributed are a product of the national assembly education committee’s decision to ensure that the two classes with about two million learners be included in the 2017 textbooks’ distribution plan.

KNUT ADMINISTRATORS MAY BE EXCLUDED FROM THE JULY 2020 PAY RISE; LATEST TSC NEWS

KCSE Results 2021 Leaked by a Seasoned Examiner Ahead of the official release; Here…