Teachershave been experiencing immeasurable challenges for years on end bordering on salaries.

To add insult upon injury, some self-proclaimed emmissaries uncluding KEWOTA and AON Minet have been scavenging on the teachers’ peanut payslips.

There before teachers have been staging demos to voice their sentiments  on low payments.

However, KNUT, the giant teachers’ union having been reduced to a toothless dog, tutors will definitely have a hard time trying to protect their payslips this time round if the government’s latest insinuations are anything to go by.

To commence, the Salaries Renumeration Commission,SRC has proposed to withdraw allowances from all civil servants.

This comes after concerns arose purpoting that the government is having ballooned debts said to have been borrowed to fund government projects.

Based on the “burden,” the government of Kenya has decided to axe hardship allowances, traveling allowances, house allowances and risk allowances as a means of relieving the debt burden.

As a result, Teachers are likely to be most affected if the salaries remuneration commission will act on its proposal, the majority having procured loans from various Banks to make ends meet and realize their development dreams.

The government has therefore been requested to look for alternative sources from which it can raise the borrowed funds to avoid slashing allowances from civil servants.

In a move to cushion Kenyans and the civil servants from the biting hardships rendered by the the spread on Covid-19 pandemic in the country, the government did also marginally reduced the Pay As You Earn (PAYE) taxes rates across all the job grades whereby the lowest paid workers were not supposed to pay any tax for a given period of time.

Workers earning below Kshs. 24,000 were not supposed to pay the PAYE taxes, while those earning over kshs. 24,000 were to take tax reliefs from 30% to 25%, which has been applied for several months now. 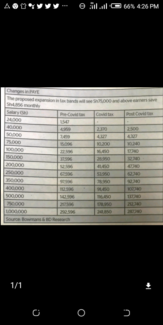 The bad news to all the civil servants is that the government has now withdrawn the PAYE tax relief applicable January 1st, 2021, a move that will see the civil servants lose huge junks of money since the 25% tax relief will be reverted to the normal 30%, as shown in the summarized table above.

Civil servants and teachers are therefore advised to brace themselves for tougher economic times starting January 2021 after the proposed ammendments are done on taxes as hinted by the government.

On top of the tax increment, they will also be liable for pension cuts, a move that will see them dig deeper into their pockets as the pandemic bites hard.